A crowd of avatars from many countries gathered to officially open the Imagination sim Inworldz on Sunday. It was a three hour event with 2 live performers and a DJ providing non-stop entertainment. 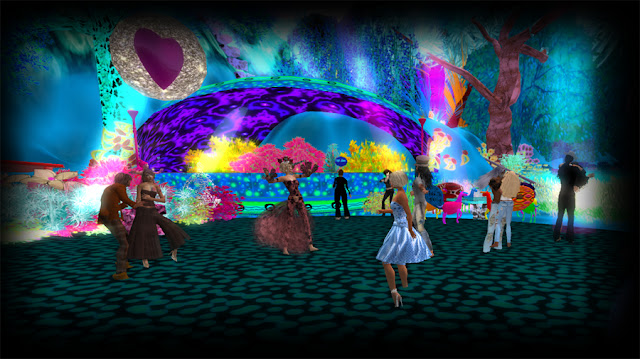 The crowd included elves, fairies, dragons and some very creatively dressed avatars, and all enjoyed the dancing and the music. 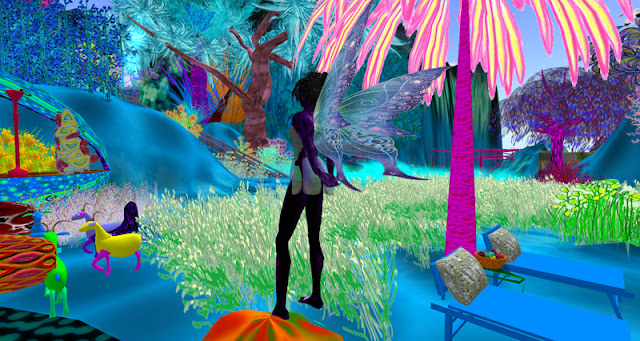 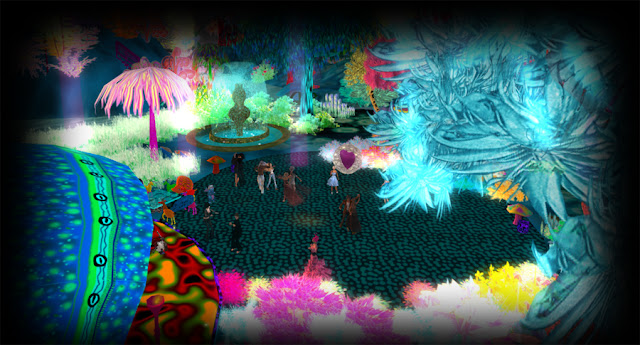 The garden was a spectacular setting for a party, although some found the need to wear sunglasses after a while. 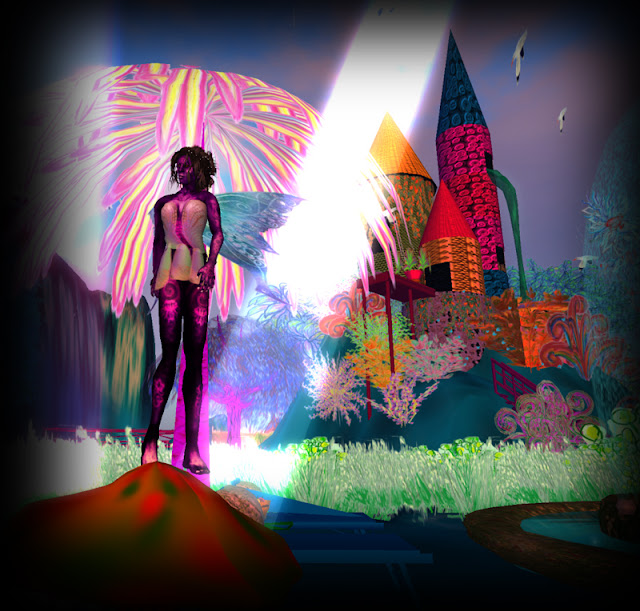 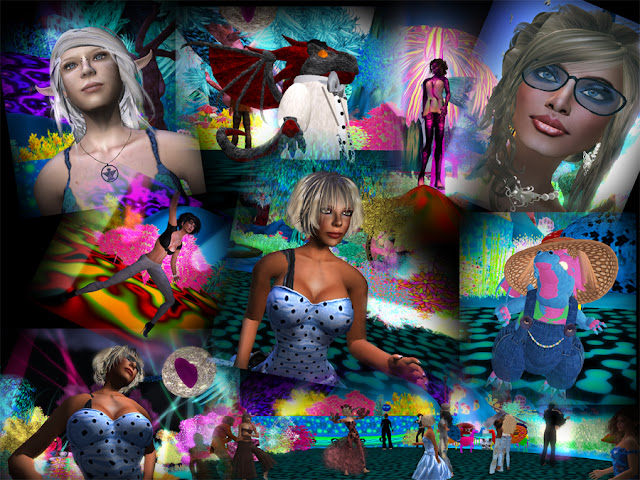 There's more about the opening on Juanita Deharo's blog  on Flicker HERE and virtual world clothing designer Fuschia Nightfire has used the sim as the backdrop to show off her latest creations HERE.
Congratulations to the students from Caloundra City private School on the beautiful textures that have made up this sim. Thank you to Victor Vezina who also contributed textures for the sim, to Jeri Rahja for offering the sim, to the wonderful musicians, and to all who came to the opening.
Posted by Juanita Deharo at 4:23 PM No comments:

Treeline 2012 is still happening over the next month but I'm already turning towards thinking about Floating Land next year and Treeline 2014. There's lots to inspire, lots to learn and many things I want to experiment with. I'll be posting some of the more inspirational things I find on this blog. Maybe that's just my way of keeping a diary, but I hope you enjoy them too.
I am interested in blending old and new media and real and unreal envrinments. The wonderful interactive piece called Night Bright (below) was created by Theo Watson for Bumble children's cafe in Los Altos, California. Knee Deep is another of Watson's interactive works, created in collaboration with Emily Gobeille of zany parade http://www.zanyparade.com/
Watching some of the videos of Watson's work I am encouraged to think that some of the immersive experiences I thought were confined to virtual worlds might be possible in a different context. I guess, at this stage, only children are unhinhibted enough to fully immerse themselves in the intereactive experience in a public place, but what if we had this sort of experience in the privacy of our own homes. Kinect comes close, but ...........

Posted by Juanita Deharo at 3:41 PM No comments: 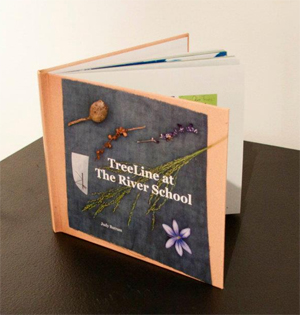 The collaborative residency at the Ananada Marga River School in Maleney is represented in the Treeline exhibition by a hard cover book 'Treeline at the River School'. Visitors can also read an electronic version of the book on a large screen. 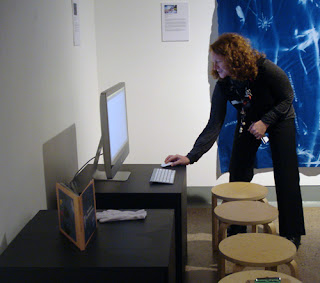 The cotton cyanotype squares made by the children are on a table in the main gallery and images of these squares are used in a kaleidoscope projection that has been a great hit as part of the exhibition.
There has been general fascination with the process of cyanotype and the beautiful imagery that has been produced by students from both River School and Kawana State High. I particularly liked the way the projection inadvertently became another sort of artwork (below)  during the artist talks last week. It was the sort of thing we played with in collage at River School, and happening right there by chance, making an amazing outfit for one of the visitors. 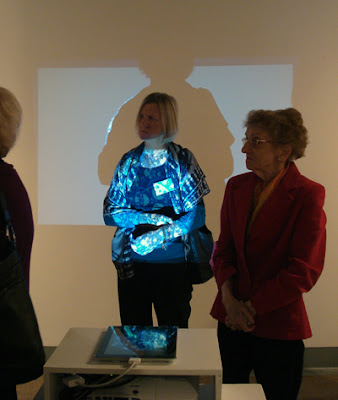 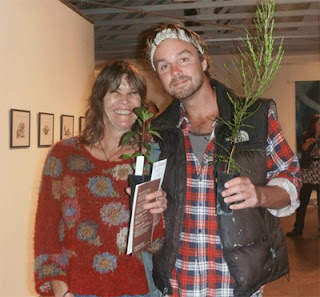 It was great to see teachers from the school Joshua Boldt and Tracey Lewis (above) there at the exhibition, seeing the end results of the days we had spent with the children.
They are holding some of the free tree seedlings that were handed out to everyone who attended the opening, courtesy of Coolum Native Plants nursery. 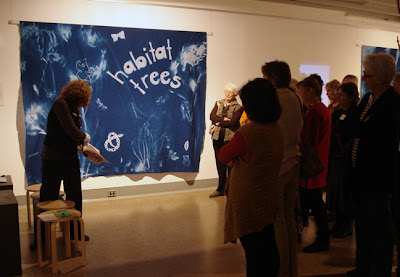 The book 'Treeline at the River School' is available online in hard and sfot cover and as an ibook, from the Blurb bookstore.

Posted by Juanita Deharo at 5:13 PM No comments: 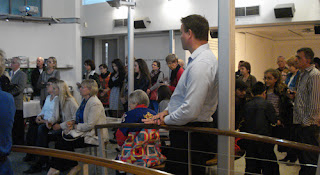 The Treeline Exhibition was officially opened on Saturday by Ross Duncan, Manager of Library and Gallery Services with the Sunshine Coast Council.

It was great to see so many people there on an afternoon of torrential rain, and to notice so many of the students and their families and teachers in the crowd.

The room showing the  Imagination video was a major drawcard, inviting people to come in and experience all the colour and fantasy of the virtual garden made with the work of students from Caloundra City Private School. 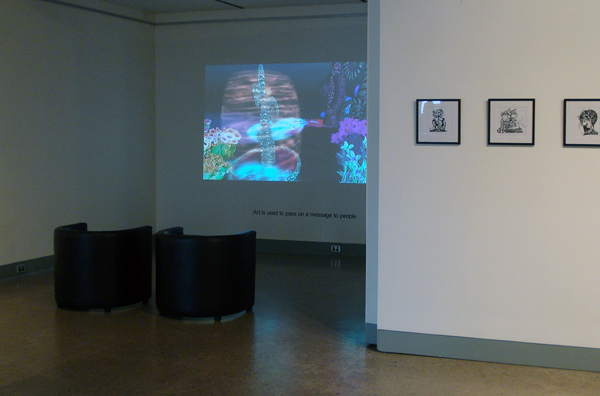 At one end of the room two comfy chairs invite visitors to sit down and enjoy the 23 minute video. At the other a series of panels explain the process of building the garden and the student's drawings are displayed on a table. 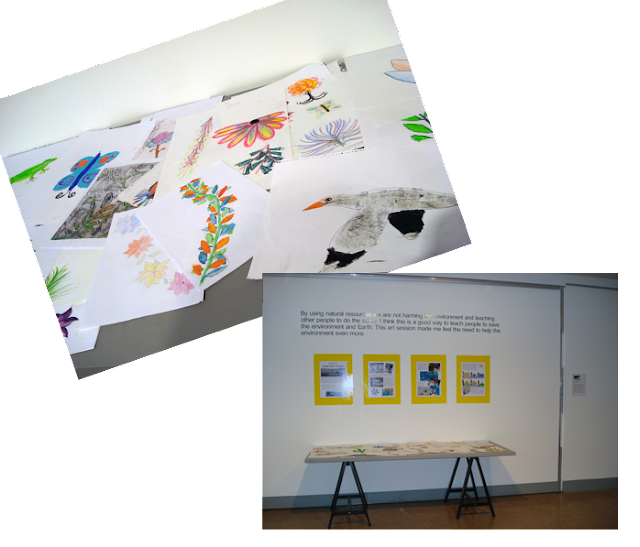 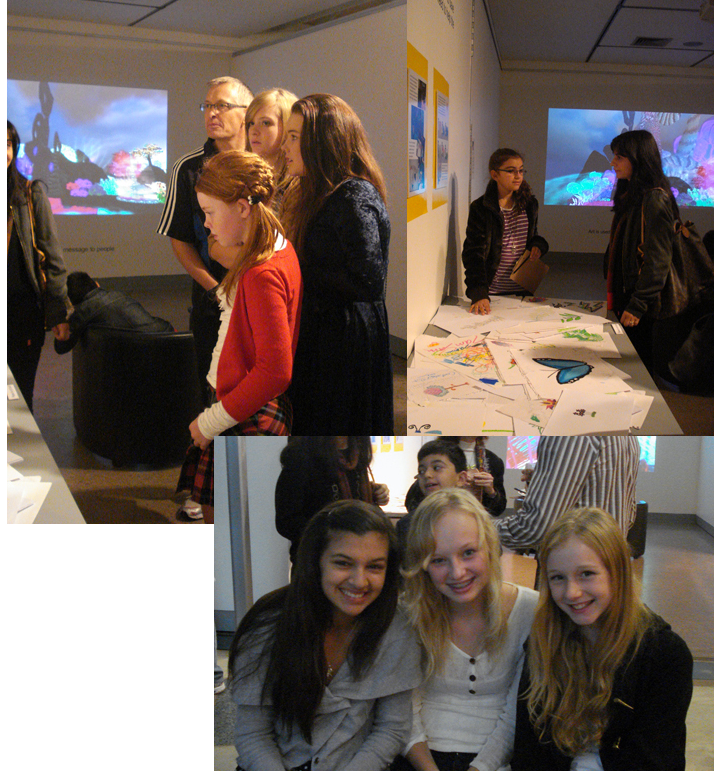 An inmportant part of being an artist is to work towards an exhibition, keeping the end product in mind and making decisions about how it will be shown. The students had been an integral part of this process and were justly proud to see their work as part of a prestigous and important exhibition in one of the Coast's major galleries. 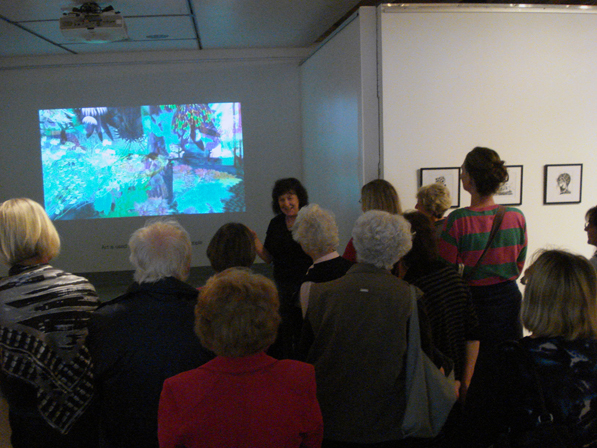 Earlier in the week volunteers and friends of the gallery had a morning tea and sneak preview of the exhibition, with an artist talk explaining the works in the exhibition.This is important for new media works like the virtual garden, as it's sometimes difficult to understand how they came about. The volunteers who will be manning the gallery during the exhibition now have some idea of the project with Caloundra City Private School and the making of objects in virtual worlds.

Congratulations to the students of Caloundra City Private School who were involved in the exhibition. Congratulations and thank also to collaborating artist Victor Keegan whose textures added another dimension to the garden.

The Imagination garden in the virtual world Inworldz, which has been sponsored by Jeri Rahja, will have its own separate official opening this week, where avatars from around the world can enjoy seeing the work as a three dimensional space. 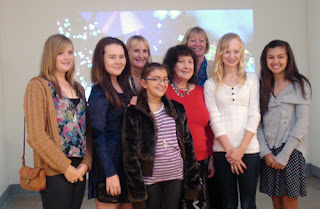 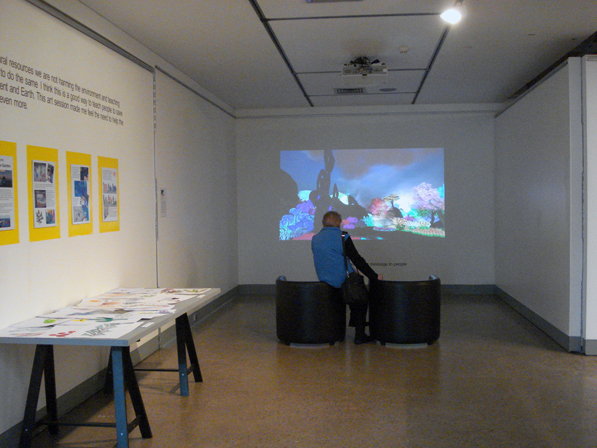 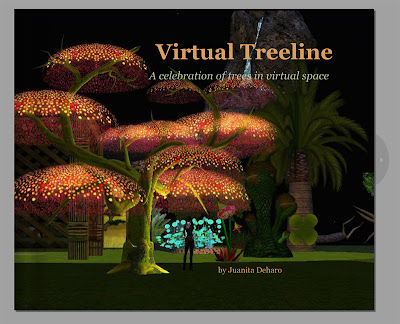 The books from Treeline 2010 Virtual Treeline and earthlines are now available as ibooks from the Blurb store. The books can be downloaded to be read on ipad, ipod or iphone.

Underwater the story of the life underwater on the Sunshine Coast in Australia is also now available in ebook format.

You can purchase and download the books here:
http://www.blurb.com/bookstore/detail/1316177

Posted by Juanita Deharo at 5:32 PM No comments: 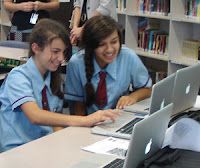 Last Friday was my last hands-on day with the students at Caloundra City Private School. We watched some preliminary machinma footage of the Imagination sim and talked about credits, what music to use, the mood of the machinima etc.Then it was 'free time'. Students could work on whatever they wanted within the project. 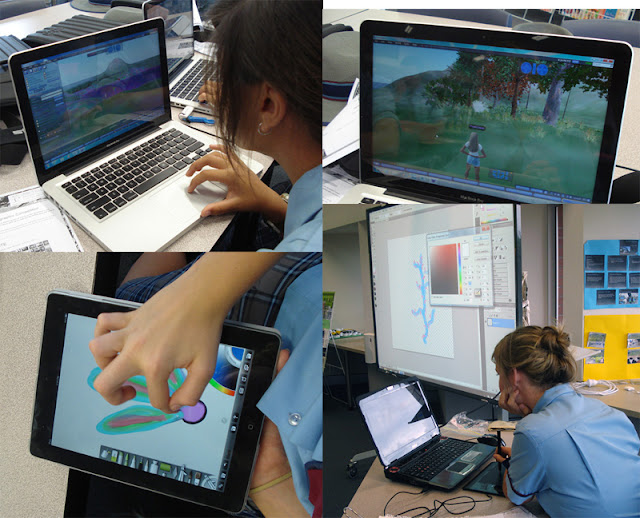 Some chose to have a relaxing afternoon creating more textures by drawing on paper. Butterflies and wings were added to the cache of plant textures.
Others chose to work on the ipad, in photoshop, on the graphics tablet, or within the sims on their hard drive. 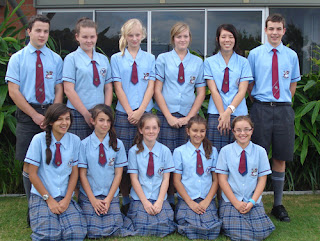 A professional photographer came to take images of the students and the processes, and we had the formal thank you's with the principal of the school and staff from the Caloundra Gallery.  The students gave me a beautiful bunch of lilies that smell so much better than any of the virtual plants we've created.

I now have a HUGE task ahead bringing all the textures created  into  Imagination  and making the machinima, but I'm looking forward to the results.

The picture on the right is the small student group involved in the project (minus Bronte). They've been great to work with and I thank them for their contribution.

Imagination  will open in Inworldz in mid May. I am still negotiating a date with our sponsor Jeri Rahja, but there will be live streaming of music and a party for avatars from all around the world to celebrate the opening of the sim. The sim is a magnificent fantasy garden created with textures  from UK artist Victor Vezina and the students of Caloundra City private School.

The real life opening of Imagination machinima will be at Caloundra Regional Gallery on June 2nd.

Posted by Juanita Deharo at 2:53 PM No comments: 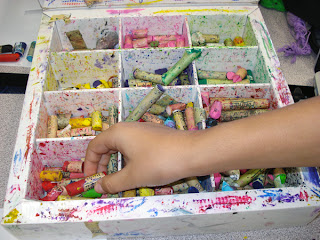 One of the objectives of artist residencies in schools is to give students an insight into how artists work. Like many artists,  I use whatever comes to hand and whatever feels right for the job. Anything at all can become an art medium if you use it creatively.
For Session Three, our objective was to make more plant textures for the garden in Imagination sim, and students used a variety of tools. 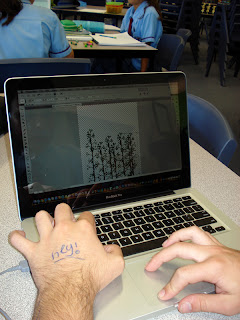 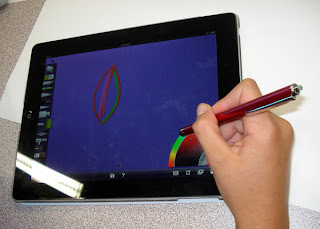 ArtRage on the ipad 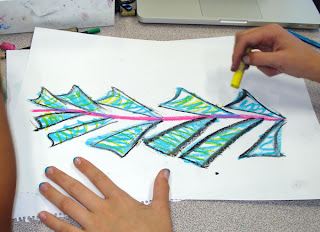 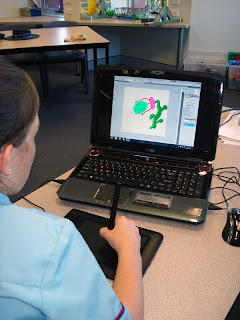 The sim is starting to look more finished. it's our last session together on Friday and I plan on taking some preliminary video footage along so we can discuss the details of credits, music and sound effects, visual effects, mood etc.
Posted by Juanita Deharo at 8:43 PM No comments: